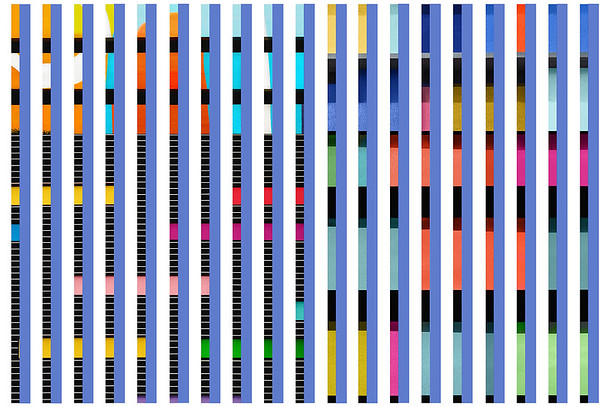 Migdalia Salazar: between photography and sculpture
By José Antonio Navarrete

The body of works of Migdalia Salazar connects the longtime tradition of artistic exploration into the reticular structure to the research on photography as a medium to produce new pictorial perceptions. The way the artist apprehends geometrical form —historically linked to abstractionism—, using photography as a representational tool, that is, as a recorder of the real world, propitiates surprising results. She transits between the creative process of a series to another with an imaginative and intelligent step that confers to her work guidance, coherence and, simultaneously, variety.
In her Echoes series, started in 2016 and still in progress, color is the end of physical experimentation with pigments, water or other liquids that she mixes inside a glass container. She takes shots of these containers reproducing the effects of the combined processes of refraction-reflexion they show. Later, she organizes her quasi-square photographs, each one with a specific color, in a polyptych composition constructed with acrylic. The works of the Echoes series vibrate at the moment when the solid form transforms into an imprecise and evanescent appearance.
In Chromatic Stroll, her new series, Salazar has also continued her early research on fragmentation and deconstruction. She has turned on her constructive photographic point of interest to the stripe as a type of piece able to lighting the primary combination of patterns, colors, and rhythms corresponding to complex formations. In this series, the artist has concentrated her regard on Miami emblematic architectures. She photographs buildings, crops the images, organizes photomontages in bands, and groups the stripes of different constructions sequentially in a creative way that reveals the hidden designs associated with their external appearance. Besides, she mounts the narrow photomontage bands on transparent, minimal volumetric structures. Chromatic Stroll attests the confluence between photography and sculpture that characterizes the series that Salazar has produced in recent years intending to dissolve the limits between these two art genres.